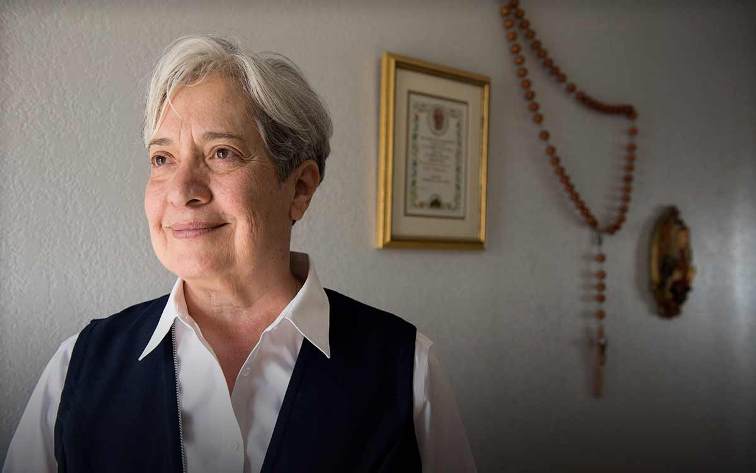 SISTER NORMA PIMENTEL TO RECEIVE THE HISPANIC HERITAGE AWARD FOR SERVICE ON SEPTEMBER 12 AT THE JOHN F. KENNEDY CENTER FOR THE PERFORMING ARTS AND PBS BROADCAST

The Hispanic Heritage Awards, which was created by the White House in 1987 to commemorate the establishment of Hispanic Heritage Month in America, are considered among the highest honors by Latinos for Latinos and are supported by 40 national Hispanic-serving institutions. The other 2018 Honorees will be announced over the summer followed by the performers, hosts and presenters.

“The Hispanic Heritage Foundation is privileged to recognize the lifetime of service by Sister Norma Pimentel to ensure that all of God’s children are treated with dignity, empathy and love,” said Jose Antonio Tijerino, President and CEO of HHF. “Sister Norma served as an inspiration to me and many others through her work in the Rio Grande Valley on the Texas border with Mexico. She represents everyone that she has touched through her grace, especially the most vulnerable in our community.”

Sister Pimentel, M.J., is the executive director of Catholic Charities of the Rio Grande Valley as well as an advocate for immigrants and refugees and the most vulnerable among us. Pope Francis publicly recognized and thanked Sister Pimentel for her work with immigrants and was recognized as one of the 2015 Catholics of the Year. She was also nominated for “Texan of the Year” and recently received the University of Notre Dame’s 2018 Laetare Medal — the oldest and most prestigious honor given to American Catholics.

Sister Pimentel, a religious sister of the Missionaries of Jesus, has been leading Catholic Charities in the Rio Grande Valley, which includes all four counties in the region bordering with Mexico, since 2008 by providing emergency food and shelter, housing assistance, clinical counseling and pregnancy care. She was a force on the frontlines of the 2014 surge of Central Americans seeking asylum in the United States or “unaccompanied minors” crisis, including the establishment of the Humanitarian Respite Center in McAllen, Texas. These efforts captured the world’s attention, drawing news media from around the globe to the Rio Grande Valley to cover the plight of the countless and distressed refugee individuals and families, thereby compelling thousands from this country and others to contribute their time, talents, and treasures to serve and support the cause.

As the daughter of Mexican immigrants, Sister Pimentel was born in Texas but grew up going back and forth across the border. She received a Bachelor of Fine Arts degree from Pan American University, a Master’s in Theology from St. Mary’s University, and a Masters’ degree in Counseling Psychology from Loyola University Chicago.

She said, “I learned the importance of living out our faith by how we welcome and protect those who need us, … an immigrant child or mother … it is a moment of realizing we are all one human family.”